The moment you set an alarm for 4:30am, you deserve an interesting day. We got nothing short of that on the day we crossed the border from Nicaragua to Costa Rica.

Here’s our attempt at describing what was the longest, sketchiest, most entertaining Cross The Border Day.

When we climbed out of our bunks at 4 am to shower, we discovered that the shower was occupied by a couple in the shower, doing what couples do in the shower at 4 am.

We watched the sunrise over Lake Nicaragua, and hailed a cab to catch our bus. The cab driver starts blasting Candy Shop by 50 Cent. At 6 am.

We rode the “chicken bus” to Rivas. In Nicaragua, “chicken buses” are basically school buses that pick people up along the street until the bus is full. It also served as a paper route of some sort: we stopped to buy newspapers that we dropped off at another stop. People got on to sell food, vitamins, medicine, pills, etc., and then got off a few stops later. Those few hours definitely gave us a taste of the commuting lifestyle in Nicaragua.

In Rivas, we found ourselves surrounded by a bunch of taxi drivers and bus operators asking us where we needed to go and offering us rides. One taxi driver, Jordi, basically said, “I’ll drive you to the border for $20.” We, as risk-takers and cheap recent college grads, decided that his offer sounded like a great option. So we hopped in his cab and made our way to the frontera. As we snacked on salted peanuts, I swear I thought they would be our last meal on this earth.

Turns out we might live to see another meal. When we got to the border, Jordi basically passed us off to a dude named Julio. In the rush of the moment, we paid Jordi partly in cordobas (Nicaraguan currency) and partly in dollars. He gave Julio our backpacks and the only directions he gave us were: “Don’t take your money out here” and “Follow Julio, he will take you to cross the border.” We looked at each other and held on to our daypacks for dear life and began following Julio, a small dark man wearing a lime green and white striped Aeropostale polo. The next few minutes are unclear to both of us, but we think we walked through what looked like a street with stores on the right side, a wall on the left, and people just standing around all over. Julio asked for our passports to fill out paperwork, and we both got ready to chase after him in case he decided to make a run for it. Thankfully that didn’t happen. Whew.

We walked through a little gate, and Julio took us to two different ticket windows and told us to give three different people different amounts of money. This is where KB and codea totally fail at almost everything. We don’t know what we paid for, we don’t know how much we really gave, and we don’t know much, period. We found ourselves in what looked like a parking lot/bus terminal/dead end. After a few minutes, we were sitting under a tree with Julio, where he told us we would wait until the bus came. We shared our salted peanuts with Julio, but what we really wanted was beer. It was 9 am.

When the bus came, we said goodbye to Julio and thanked him. We tipped him with all the cordobas we had left, and a few dollars. To this day, we don’t really know who he was or what he did, but our lives were in his hands and hey, we’re alive and well. So thanks Julio, for getting us to Costa Rica.

So there we were, finally on a bus to Liberia, Costa Rica! Just as we got comfortable, the bus stopped and we were back to being lost, but we followed the crowd. We took our belongings and went through security and immigration. Back to the bus. Kerianne sat next to a mother breastfeeding her child, and I next to a not-so-great-smelling human. It was just as awesome as it sounds.

The bus ride ended as quickly as it began. They played Thor and just as we were getting into it, the bus stopped and they called for passengers getting off in Liberia. We were the only two to stand up. We got off the bus and found ourselves in the middle of a highway, dirt and dust swirling around us, blinding our eyes. Kerianne had to climb into the bottom of the bus to dig our backpacks out because, of course, they were buried all the way in the back. And taxi drivers were bombarding us with questions about where we were going. With tears in our eyes from the dust cloud that welcomed us to Costa Rica, we picked a taxi and had him drop us off at a bus station.

We stopped at one bus station before realizing it was the wrong one. When we finally got off at the right bus station, we bought tickets to Tamarindo, and headed straight for the little restaurant we spotted in the terminal. We sat down and had no words to discuss the last few hours. We ordered empanadas and batidos and before we knew it, we were on the next bus of the day.

We laughed really hard for a long time on the bus to Tamarindo, trying to figure out how we got where we were. Still no explanation.

In Tamarindo, we checked into our hostel and headed straight to the beach to grab a beer with a fellow traveler we met on the way.

The rest is history. Our night began with beers on the beach while watching the sunset, and the next few hours involved several shots of chili guaro, Cuba libres, gambling at the casino, more shots with more strangers, dancing, and celebrating some guy’s birthday. Welcome to Costa Rica.

From Nicaraguan sunrises to Costa Rican sunsets, and lots of adventures in between,
codea + KB 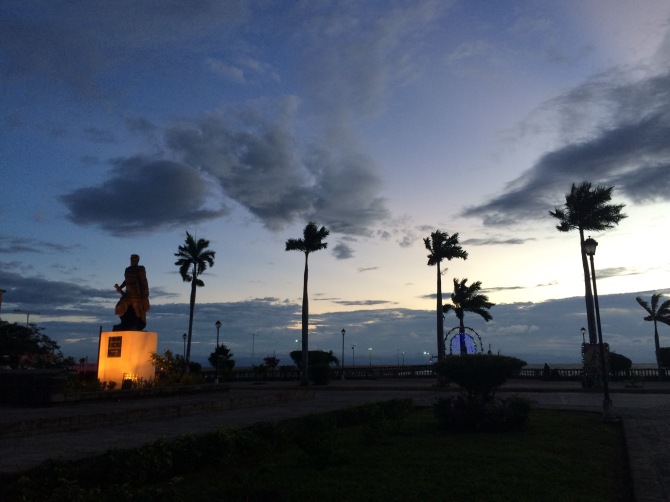 The original version of this post appeared on December 10, 2014 on @codea‘s blog, Christine Meets Life.